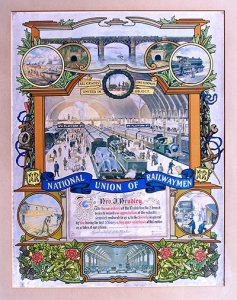 For hundreds of years organisations with a marching tradition used banners to identify themselves and their cause, with banners relating to trade societies and reformist groups dating back to the 1790s.

The banners of railway workers and their trade unions are amongst some of the most detailed and evocative of the British Labour Movement, and date back to the 1870s.

The premier manufacturer of trade union banners was George Tutill & Co., of City Road London, who commenced manufacture in 1837 and continues to this day.

The Union was formed in 1913 following the amalgamation of various rail related unions and societies, dating back to the 1870s.

The combined union had a membership of 267,000 by 1913, and opened its doors to female membership  in 1915, in recognition of the number of women employed on the railways in the Great War 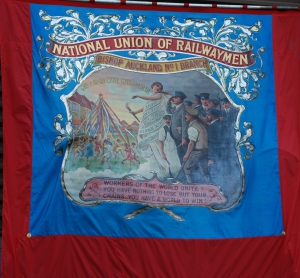 The beautifully preserved double sided hand painted banner of the NUR Branch No1 now hangs proudly from the rafters of the Four Clocks Centre, in Bishop Auckland.

For a fascinating insight into what is probably  the finest example in the world please click on the banner illustration. 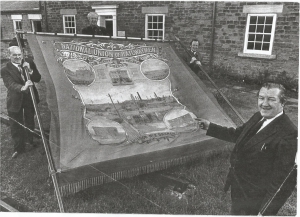 It is the intention to institute a campaign to raise funds to restore this important social artefact to its former glory! 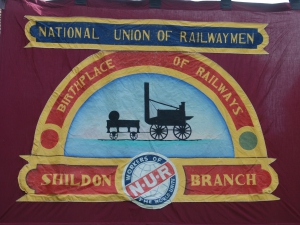 This fabric single sided banner was manufactured in the 1970s, and is in reasonable condition, needing only light restoration.

Its historic significance lies in its association with the closure of Shildon Works in 1984. The banner was both displayed and marched in a concerted campaign to avert closure