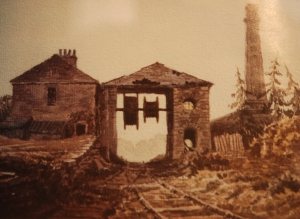 Unlike Etherley, where little remains,we are fortunate to have remaining, at Brusselton, the original engine-house, bearing it’s “H1” S&DR property plate,the engineman’s house plus a row of cottages to the south of the old track, all now private dwellings. We also have remaining the reservoir,now converted in a nature reserve. A row of cottages to the north of the track along with the winding house structure, boiler house and chimney have all been demolished. In it’s heyday Brusselton was a thriving community of workers and their families housed at summit level.
Brusselton was powered on both inclined planes and the original installation comprised a 60hp engine consisting of two 30hp steam engines mounted on the same axle,designed by George Stephenson and constructed at the Forth Street works of Robert Stephenson and Co. However within a matter of months of commencing operations, in 1825, the S&DR resident engineer, Timothy Hackworth found it necessary to carry out repairs to the Brusselton double engine which was proving unequal to the task.Trains of wagons proved difficult to haul and the vertical drums caused operational problems. On occassion the whole system ground to a halt! 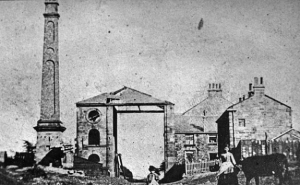 Despite installing a horizontal double acting system and carrying out other modifications,in1826, by1831 the original 60hp motor was proving so inadequate it was replaced by a more powerful 80hp engine. Designed by Hackworth and built by R and W Hawthorn it was a massive affair with a 21ft- 10in flywheel and four 45 ft long 5ft diameter boilers. As a consequence the boiler house and chimney had to be placed at the north side of the track. The winding shaft structure with its two unequal drums spanned the space between the boiler house and engine house, high above the passing wagons “in all a true feat of industrial engineering”.

The new engine with its associated works had the capacity to haul six sets of twelve wagons in one hour ,at the remarkable speed of 15 mph!
As a tribute to Hackworth’s engineering skills it proved to be an excellent and reliable installation and in one day in 1839 the system achieved sixty seven runs; with the passage of some 2120 tons over the Brusselton ridge!
That said we must mention here the engineman Robert Young who worked 12-16 hours a day for a mere 22 shillings a week, and it is said went “twenty years without a holiday”
Whilst, in operational terms, outlasting Etherley by some 13 years, Brusselton incline ceased to function in 1856, when the line from West Auckland to Shildon tunnel was opened. There was no longer the necessity to haul coals from the Gaunless valley over Brusselton ridge.
In 1859 the 80hp Brusselton engine was sold by private contract, along with a number of other static engines on the S&DR network but fortunately for our industrial heritage the historic site remains!