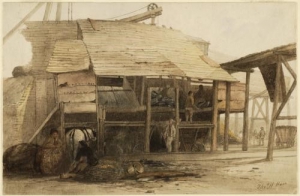 Whilst at Etherley Top little evidence remains of the presence of the engine-house or engine-man’s cottage, it in no way diminishes the significance of its place in early railway history

Having chosen a direct rote to the Gaunless Valley from Phoenix Pit, the effective operation of static engines powering the Etherley and Brusselton inclined planes was critical to the commercial success of the line.
Like its sister installation at Brusselton, the Etherley static engine was to prove unreliable. In common with Brusselton Timothy Hackworth was to carry out modifications, reverting to a horizontal drum arrangement to reduce rope breakages, and upgrading the static engines from 30 to 40hp. It was up the 1109 yard long north incline to Etherley Top the first 12 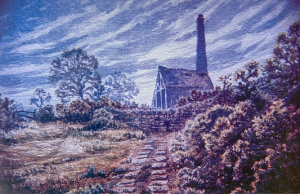 wagons of coal from Phoenix Pit were hauled on the 27th September 1825; and lowered down the 2185 yard long southern slope under gravity to the Gaunless valley.

Thomas Greener was Etherley’s first engine-man and was to prove both resourceful and committed to the task. Frequently working with his men after dark, performing their tasks by the light of fire-lamps or low ropes. 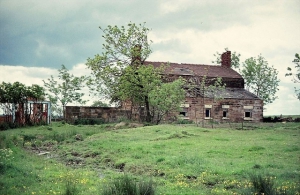 Last photograph taken of the engine-man’s house in the 1970s, prior to demolition in the early 1980s

The Etherley incline ceased to operate in 1843. The opening of the Bishop Auckland Tunnel Branch in 1842 facilitating the construction of the Wear Valley Railway direct to Witton Park; and as such providing a direct route to the main Stockton & Darlington network. Once redundant the main route was soon abandoned, and the 1859 OS map (surveyed 1855-7) shows the Etherley incline as as disused railway with no track
In 1859 the Brusselton and Etherley static engines were sold by private contract, along with other static engines from the Stockton & Darlington network.

As to the physical remains the Etherley engine house and engine-man’s cottage, bearing its S&DR H5 plate, disappeared in the 1980s, with the chimney structure being demolished much earlier. The area is now returned to its original state as windflower meadow, although their is still evidence of the southerly of the two spring-fed ponds, on which the static engine relied for its water