Our photograph, c1947, is of the LNER pigeon train stopping at Bishop Auckland on a Friday evening, on its overnight journey to meet the Dover to Calais train ferry.

LNER had a special train, with adapted bogie passenger vans with drop down shelving to carry pigeons, for unloading to race home. Many Durham miners had crees in their allotments and pigeon racing remained a major pastime after the Second World War.

The main transport group in the Durham coalfield was known as the Up North Combine, which still remains today, based at the Mine Rescue Station at Peases West, Crook. Their lorries took baskets to different parts of the UK, but for races from the continent the pigeons always travelled by train.

Before loading onto the train, each pigeon was fitted with a rubber ring around one leg. On arrival home the ring was removed and put into a pigeon race clock to prove and date of arrival home. 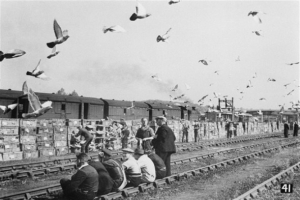 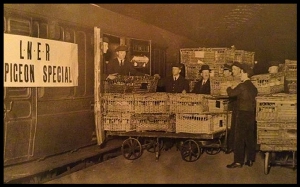