The Hardest Of Times! 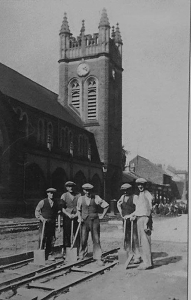 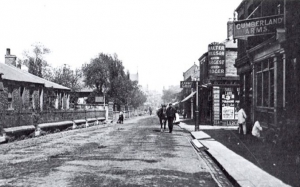 Our photograph, taken in the 1930s, shows road gangs working on Newgate Street, with the iconic Wesley Church in the background, with its four clocked tower.

With the population of Bishop Auckland around 14,000, the Depression had hit the area hard, following the Wall Street Crash of 1929. By 1932 unemployment had risen to a disastrous 60%, as a result of widespread pit closures, and associated flooding of many of the mines. Freight traffic, dependant on the local coal trade was also in decline,with a similar decline in mineral traffic from Weardale. Such gangs as ours were often set-up to give work to an increasingly beleaguered workforce of redundant miners. The narrow gauge railtracks shown being laid on temporary basis to transport materials.

As to the Wesley church itself, it was opened in 1914, as a place of worship but also as a refuge for those in need. The church was built on the site of the former Brougham Place, whose low rise buildings can be seen to the left of the inset photograph. On the east side, of the then South Road, we can see the Cumberland Arms and the Walter Wilson grocery store